Meeting minutes may seem like the least important aspect of your nonprofit’s board meetings. But these records of attendance, discussions and votes are critical to protecting your organization and demonstrating your directors’ proper execution of fiduciary duty. Minutes also lend structure to meetings and motivate members to act on board decisions. So it’s important to take these records seriously. 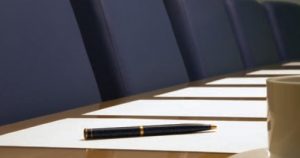 It may sound like a contradiction, but board meeting minutes should be clear and focused, yet also detailed. Certain information is fundamental: the meeting’s date and time, whether it was a special or regular meeting, and the names of directors attending, as well as those who didn’t. Your minutes should also:

Attorneys often advise their clients to include enough information in meeting minutes so that they can be offered as evidence that an action was properly taken and that directors fulfilled their fiduciary duties. When in doubt about the depth of detail to include, consult legal counsel.

Generally, your minutes should be ready for inspection by the next board meeting or within 60 days of the date of the original meeting, whichever comes first. IRS Form 990 asks whether there is “contemporaneous,” or timely, documentation of the board and board committee meetings in minutes or written actions.

The person assigned to take minutes at your organization’s board meetings should produce a straightforward report that summarizes actions taken and describes the basis for any decisions. Simple and unambiguous wording is best. Indeed, if meeting minutes are so abbreviated that only the keenest insider can understand them, your leaders aren’t meeting their obligation to be open and transparent.

To that end, have a second person review your meeting minutes. That person (as well as the original writer) should ask, “Would this report make sense if I hadn’t been at the meeting, and had been unfamiliar with the issues addressed? Would I be able to see at a glance the information provided and decisions made?”

If your organization is ever audited by the IRS, your meeting minutes likely are among the first documents the agency will request. And any attachments, exhibits and reports generally are considered part of the minutes. Meeting minutes also can serve as evidence in court. For example, if someone alleges that your board made a hasty decision in cutting a program, meeting minutes can be used to present the data board members relied on when making that decision.

It’s easy to forget that board meeting minutes are public documents and that many people will review them for many different reasons. To ensure that decisions made by members are easy to understand — and justifiable — strive to produce clear, comprehensive meeting minutes.

At times, your nonprofit’s board may need to meet behind closed doors to discuss sensitive or confidential issues, such as key person salaries, a staff dismissal or a lawsuit. Details of these sessions should not be included in regular meeting minutes.

However, regular minutes should include a notation that the board moved to an executive session and indicate the general topic of the conversation, without violating confidentiality. Also make sure you know your state’s sunshine laws. They may mandate that certain meetings be open and specify what you must document.