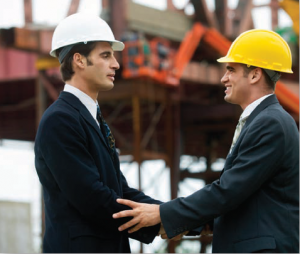 With the real estate market on the rise in many parts of the country, developers may have more opportunities to obtain financing through joint ventures. Such arrangements can certainly pay off, but developers must take care before jumping in. Here’s a look at several issues to address early on.

Let’s be honest — both parties in a joint venture generally want to make money. So, the following economic issues are critical to address before entering into an agreement:

A joint venture also raises several tax issues that parties should address in the agreement. This includes income allocation, depreciation allocation and lockout periods on the property’s sale and debt repayment.

Minimize disputes by delineating the decision-making authority clearly. Experienced developers know that a project can grind to a halt if an equity investor insists on control over relatively minor decisions like leases and repairs. The parties must find a happy medium that doesn’t risk slowing operations but still allows investors to protect their interests.

Typically, the developer will oversee construction and day-to-day operations of a completed project via an affiliated management company. But the investor will have a vote or veto rights on major decisions, such as the admission of new members to the venture, reinvestment of proceeds, financing, budgets, and property purchases and sales.

During construction, the construction loan guarantee will require the developer to fund overruns. The joint venture should establish how to treat such payments.

Options include requiring the developer to simply absorb the costs, treating the costs as capital or as loans. If the agreement treats the payments as capital, the return on such capital is generally subordinate to the equity investor’s preferred return.

All good things must come to an end, as the saying goes — and that applies to financing joint ventures, too. It may be counterintuitive to think about how the partners will exit the arrangement before construction has even begun, but doing so can help avoid some uncomfortable and potentially costly conflicts later. For example, the parties might disagree about how long the venture should hold onto the property after construction ends.

The joint venture agreement should provide for a clear exit mechanism that either party can use to leave the venture on a triggering event, such as the death, incapacitation or misconduct of one of the partners. These agreements usually specify a minimum hold period after project completion in order to secure capital gains treatment for sale proceeds.

After that period, the agreement should specify what happens next: The business can dissolve, or a buy-sell clause can be activated, requiring one party to purchase the other’s interest based on a valuation by a neutral appraiser. Alternatively, the agreement could allow the parties to market the property for sale to third parties. A partner who declines an offer that’s acceptable to the other partner must either buy the other partner’s interest or sell its interest to the partner for the value set by the third party’s offer.

Joint venture financing often works well for both parties involved. With proper planning, you can avoid potential problems, and the project can leverage the developer’s real estate expertise and the equity investor’s capital.