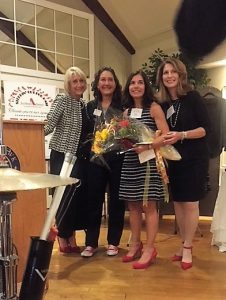 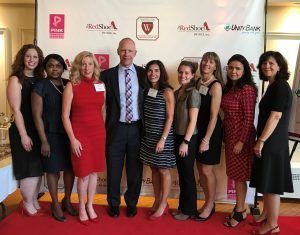 On Tuesday, September 26, the Sussex County BW NICE Chapter presented its first-ever “Businesswoman of the Year” Award to Nisivoccia LLP’s Director of Marketing, Laura Lampron. According to BW NICE, the Businesswoman of the Year is awarded to someone who “inspires us with her leadership, energy, concern for others and commitment to business and community.”

While accepting her award, Laura reflected back on her journey of giving back to the communities around her.

“Working for Nisivoccia, we learned early on the importance of giving back to our clients and to the communities that we live in and that we serve. So when I thought about how I wanted to get involved and give back, I knew I wanted to use my background and my experience to help women and support women’s organizations,” Laura said.

She explained that her first opportunity to help those suffering from domestic violence was not until 1998 when her company was doing a clothing drive for victims.

“It was the first time I heard the stories about these women who had to leave in the middle of the night to seek safety,” Laura said. “It stuck with me.”

About 20 years later, Laura received a phone call asking to be a part of the Board of Directors for Domestic Abuse & Sexual Assault Intervention Services, also known as DASI, a nonprofit organization that provides comprehensive services to survivors of domestic and sexual violence. She told the audience how excited she was to serve on this board and continue to devote her time to this cause.

“It really is a dream come true for me to support the organization and the DASI team.”

Diane Simovich, Founder and President of BW NICE, then presented Laura with a hand-blown glass red shoe as a thank you for her dedication to both BW NICE and DASI.

The rest of the night included live music, shopping among local vendors and a silent auction. According to the Sussex County BW NICE website, the mission of the Red Shoe event is to “help raise public awareness and funds to support the immediate needs of the women and children in local safe and transition housing while helping them gain dignity and hope for a new and better life.” The event supports both BW NICE, Inc., and the chapter’s local charity partner, DASI.

Nisivoccia LLP is a proud supporter of BW NICE, Inc.

About BW NICE
Established in April 2009, BW NICE, also known as Business Women Networking Involving Charity & Education, is an organization that blends the successful building of women in business with helping other women achieve their potential in life and profession. BW NICE provides a warm, friendly atmosphere that is supportive, educational and dynamic, so women will make meaningful business connections, learn tips and techniques for new ways to succeed and leave each event motivated.